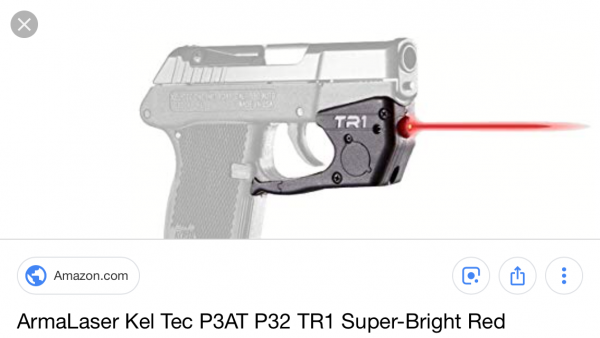 Until last week, I only knew of Crimson Trace making laser units that clamp around the trigger guards of small semi auto pistols.

Then I say that a company called Viridian makes them too, and Ruger installs them at the factory for some of the Ruger LCP and LCP -2 or LCP II models. They look appealing, but I have never seen one in person.

TODAY I WAS INTRODUCED TO YET ANOTHER TRIGGER-GUARD ATTACHING LASER UNIT:
The ArmaLaser TR-1, which came on a slightly used Kel-Tec P3AT for a great price.

This unit at first looked the same as similar units from Crimson Trace, but in use I found that the plastic shell takes up a lot of room inside the trigger guard, making it a bit awkward to get on the trigger in a hurry. That is not a problem I ever found on any of the non-laser KelTec .380's I've dry fired before or the KelTec P32 that I've owned for 10+ years.

The momentary "ON" switch on the TR1 is a little gold colored strip of metal located on the front of the grip. It comes on easily with a very light touch.
The laser has a on-off switch to deactivate if you'll be handling it or transporting it in a way that might cause the momentary switch to come on inadvertently and drain your battery.

I just saw that the company's GREEN laser version of this
is available on Amazon for only $148.
Green is much easier for the human eye to see, especially in daylight. 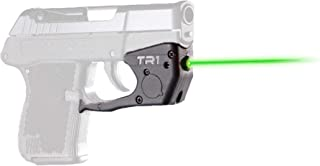 P.S. I've had this pistol and the ArmaLaser (red) on it for 5 years now, and I'm happy with it.
I've gone through 2 or 3 sets of batteries, but only because the laser often activates from just handling the gun as I transfer it in and out of my pocket, a holster, my car's center console, my reading chair's end table, etc.
You must log in or register to reply here.
Share:
Facebook Reddit Email Share Link