The Lego that laid the Golden Hen

Last Friday We headed down towards West Point again. The fishing was world class, maybe a tick off from the superkalifragilistikexpialigetisch like it had been. But we still hammered them It took us a few spots to find them but once we did. They were catching a fish or missing one every cast. I am not sure how many we had, maybe 50-60 fish. Once again we had a great mix of fish, it was mostly 3-4 pound Hybrids, but had some 7-8 pound stripers, a 3-4 pound shoal bass, some big catfish, oh my! I had a grandfather, father and son on the boat. That is always a cool thing.

I have had a busy week on the Hooch north of West Point Lake.

Last Wednesday 4/27 I picked my son up from school and headed over to the Hooch. We only had about 3 hours and I had about 7-8 spots up and down the river I wanted to fish. Some spots we only made a single cast, it's amazing what just one well placed cast can do. We had a 7 pound hybrids, 12 pound striper, huge gar, and a nice bass. River casted and caught the largemouth all by himself. Here is a video of him reeling in the striper
4/29 Friday morning we fished an section and had three stripers. One was 15 pounds. But we hit at least 6 good areas. There are a few stripers moving up the river but they are not thick yet. They should be there in a week or two. Friday midday we headed south to another boat ramp and had pretty good fishing. A handful of hybrids, one striper and we had some really big largemouth. The best five would have been 20-25 pounds... It was a good trip. We saw a pair of bald eagles.


Saturday during the morning, I assisted with a riverkeeper cleanup.
It was a beautiful day to paddle the river, the water was pretty and the flow was good. The riverkeeper had a great turnout. I cannot say enough good things about this group and organization. I encourage everyone to donate or volunteer if they can. You don't really even have to do much heavy lifting. They are a fun and safe group to paddle with.
After the riverkeeper cleanup I met up with some clients and we headed back south. The stripers didn't cooperate, we had one hybrid up to the boat that I managed to knock off with the net. But the largemouth and spotted bass fishing was great again. We had a decent size catfish and a gar. Out best five bass would have been near 20, maybe 25 pounds. I was disappointed the stripers didn't bite but they had a blast and were impressed, so that is what counts!

Tues I tried to recreate my trip from Friday. The water was a little lower and beautiful. With the better water I had higher hopes for the fishing up further north. But the stripers did not cooperate. I think we only had a couple of bites and no fish!
So we packed up and headed down south to try the largemouth spot. The water level was about a foot or two lower, The bass were not packed in as thick as they had been. After that we found some stripers. But we missed more than we caught, and we didn't have any big stripers. We tried hard. The tougher the fishing is, the harder I work! I am probably being too hard on myself, but I have very high expectations. I had a great group of old friends. We saw a bald eagle twice. It was still better than sitting at home! I have not gotten many pics from that trip.

Captain Matt Robinson said:
Here is an old report, Sorry I didn't post it earlier. I took Farmer Dude from here on the ODT.

The fishing continues to be fantastic.
I fished Monday the 4th, I had two fathers and sons. The kid named River was turning 10 y.o. the next day. It was a surprise birthday present for him. The fishing in the morning was good, One of the kids wasn't feeling well, so we dropped him and his father off. And went back out with the birthday boy and his dad. We knew what to expect at the spot we had been fishing, they were game to switch it up and try some new areas. I fished a section of river I hadn't before and caught about 15. I thought if the fish were there they might be really stacked up in another hole, and they were. We caught a fish every cast until we ran out of bait. The birthday boy had a lucky shad that he caught 4 fish on. Probably had over 70 fish for the day.

The father told me about a cool thing that I am sad and ashamed I didn't know about before. Georgia gives "Angler Awards" And more importantly, youth angler awards. They give you a t-shirt and up to three hats embroidered with the Name and fish. We were able to document five eligible species for the birthday boy. We had a shoal bass, Hybrid bass, Striped bass, channel catfish, and a blue catfish that were all over the required length.
https://georgiawildlife.com/fishing/anglerawards


Missed this post somehow, but yes we landed a crapton of fish with Captain Matt. Was an awesome day on the water!

It was my boy's 10th birthday and we started the first double digit birthday rocking to Judas Priest at Ameris Bank Amphitheater, followed by some shootin' with his new .22LR revolver, capped off fishing with Matt in the Hootch. Sad to see those single digit numbers over, but we had a heckuva 10th celebration!

If ya have kids who like to fish I recommend an outing with Captain Matt in one of our Georgia rivers. He is great with kids - helping them wherever needed, pointing out local wildlife, answering their questions, and generally just good at reading them and accommodating them. As mentioned we did this adventure with my boy's best mate who at some point got a little sick, so Captain Matt took he and hia father to a nearby shaded area where they were able to get out of the sun and off the water for the boy to feel better. My boy and I have been fishin' together since he could crawl so he's no stranger to FISHING - no strikes, lost fish, cut line, etc. But that day the Hootch was alive and everyone was landing fish after fish, and when the other father and son left we headed back out to explore new areas not yet fished before. And we had double hookups, landed fish and lost fish until we had no bait left. It was a fun time with Captain Matt and my boy on the Hootch!

Regarding the GEORGIA YOUTH ANGLER AWARDS if ya have a kid into fishing or a kid you want to enjoy fishing more so you can spend that time with him/her fishing check out this program. Recognized fish earn the kid a tshirt, a certificate, a hat, and their name listed in that year's awards list. Some kiddos are motivated by awards/prizes.
You must log in or register to reply here. 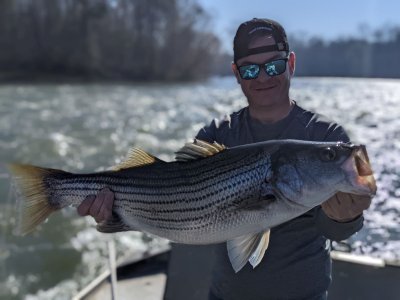