Still have this bcm I posted a few months ago but went out of town and never sold it. I bought this approximately a year or maybe longer from a guy off of here. I haven't fired it at all and he said he put 2-300 thru it. He said it has a Midwest rail. Fde color dk what coating is on it. I'll take 1200 for it. Will be in Atlanta the 20th and after that I can meet anywhere between Sav and Macon off i16 most days. Text 912-314-3645 for faster responses bcuz I may not get on here but once a day. No trades so don't ask. And no I'm not a gun tradervand only get on here when I wanna sell or buy. I might go 6 months wo getting on this damn site.thats what it's for. So comment all the stupid comments about thus as bn fake and ill just delete ur idiot comment... if I can figure out how. The end.

If you was closer id take it
J

This item has been relisted. The new listing can be found at https://www.theoutdoorstrader.com/threads/fs-bcm-14-5-fde-color-p-w.2811050/.
You must log in or register to reply here. 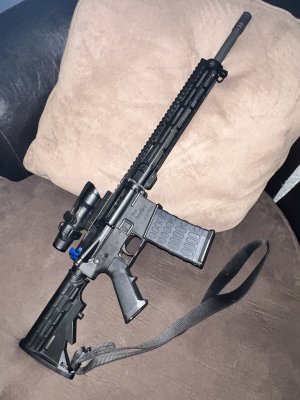