hikingthehills said:
I had a little 4 point that clicked at me a few years back. It was wild. That nose jammer is awesome. It smells like vanilla and it strong. Don't be afraid to cover yourself with it though. I don't go to the woods without it anymore.
Click to expand...


My grandfather always told me to place vanilla flavoring on my boots. It works, masking scents.

I brought down the Iron Curtain

Hit and miss is so true.

I know that thousands of deer have been killed by people in blue jeans, but UGA did a study about deer vision.

Blue, any shade, stands out to deer like fluorescent green or orange to us. They don’t “see” red colors like we do. However, they can see shades of blue and ultraviolet that we can’t. And if you think about it, how much blue is in nature? Blue Jays, Tom Turkeys, insects. not much big blue in nature, so our jeans will “pop” out like a visual alarm.

Start scouting your local WMA's and public lands, if possible, gain permission to hunt private land through leasing, buying, simply asking permission, joining a hunting club, etc. Hunting deer in GA is just really not very hard. There is an overabundance and that's part of the reason you get 12 tags if you so choose to use them. Finding land to hunt the deer, that is the more difficult task! Hopefully someone close by you can help flatten the learning curve for you. Welcome to the hunting ranks and nice of you to offer an exchange of skills in return! Good luck!

I will have to track me down some of the nose jammer.

I have done a fair amount of reading and watched a number of videos on the topic. The trophy hunters definitely aren't realistic. I know that well from fly fishing, you rarely walk out in the woods or to a stream and run across a trophy. I know what I would term the theoretical side of hunting moderately well. Turning the theoretical knowledge into a practical knowledge is where I have the knowledge gap.

hikingthehills said:
Lot's of great points here. Remember the only thing that makes a deer a trophy is a good clean kill. Don't let horn hunter's discourage you. I let the fawns walk and if I need meat everything else is in trouble.
Heck I don't even use scents and the only time I use a grunt call is if a deer has been spotted and is going the other way. It's great way to bring them back. Blind calling just never seems to work out for me.
This seems to work the best for me to keep me from being busted. I cover myself head to toe and have had a ton of deer 30 yards down wind that didn't spook. 
Scent killer is completely unnecessary. I can't count how many deer I have shot with a lit cigarette hanging out the side of my mouth. Including when I took this bruiser with a smoke pole at inside of 10yds... 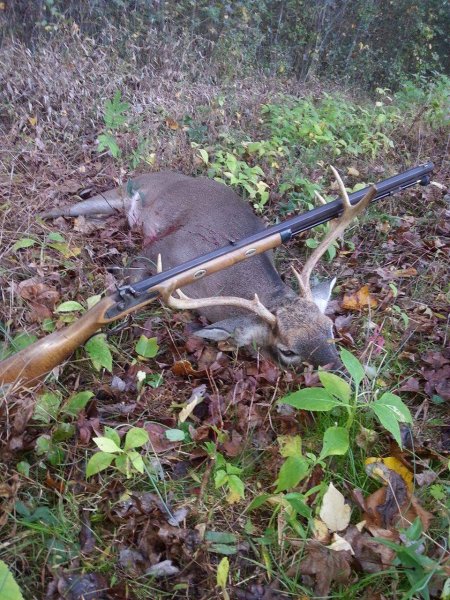 Rabbit2047 said:
Scent killer is completely unnecessary. I can't count how many deer I have shot with a lit cigarette hanging out the side of my mouth. Including when I took this bruiser with a smoke pole at inside of 10yds...


Haha it works for some but not others.
When I smoked I never had a deer come by and would actually have them blow at me all the time so I quit smoking in stand and started busting deer.
Scent control has worked for me but my best tactics have been showering with scent killer body wash, scent killer anti perspirant and zero cover scent , getting on stand early before I start sweating.
I sweat profusely and it’s one of my downfalls.
Every time I’ve used bug spray the deer avoid me.

This might sound really weird but as a deer hunter I like to try new tactics.
Last season I began putting a dab of red armor power saw fuel on each ear and the back of my neck to keep the gnats at bay, actually worked well and I had no problem with deer avoidance.
I guess they smell enough petroleum products in the air that it doesent bother them.

Here’s Another hit and miss.

Ive tried vanilla scent numerous times in areas where deer frequently cross several times a day like clockwork and for some reason they avoid the areas like the plague.
I think because it’s an unfamiliar smell in a familiar spot and it spooks them.

My best all time cover scent has been ever calm speed stick for your clothing or boots and there used to be a product that you could sprinkle on the ground like a powder as you walk in but it’s no
longer available….I think Primos made it.
It was mainly crushed persimmon and I’ve had them follow me to my stand and look right up my ladder licking their lips minutes after I sat down.

I do like crushed persimmon and it’s a great lure if used lightly but smart deer will avoid anything if it’s out of synch with their habitation.

All that being said….we all know the one doofus that hunts one day a year with his buddies, drives to the mountains, drinks all night, stumbles to the stand, cracks another beer to remedy his headache, throws up all over himself, passes out , falls out of his stand, rolls down hill and gets woken up by a trophy
twelve point buck licking his face which steps back when he comes to…..offers a perfect broadside and waits patiently while budweiser boy raises his 30.06 and drops him where he stands…..then calls his buddies to help him drag this monster he says he tracked all morning.

The Lego that laid the Golden Hen

Rabbit2047 said:
Scent killer is completely unnecessary. I can't count how many deer I have shot with a lit cigarette hanging out the side of my mouth. Including when I took this bruiser with a smoke pole at inside of 10yds...

I would say you are 50% correct. If the wind is blowing away for the deer you're right. Blowing towards them you're wrong. For probably 10 years I was bow only. I've been blown at more time than I can count. The nose jammer isn't 100% but I would give it 90% success rate of not having deer blow at me down wind while hunting from the ground at ranges up to 20 yards. I've seen them stick their noses up in the air smelling but not spook many times. I do a good bit of hunting on the ground and I'll give myself every advantage I can. Your mileage may vary but this has been my experience. I spend probably more time in the woods than anybody I know and this is just my observations.

^^^^Im headed there right now with the power saw.

W Beard said:
Not sure if this is the best place or not. I have hunted a couple times over the years but only for doves. I would love to learn more
Click to expand...

Georgia DNR organizes classes and events for youth and adults. Check their magazine and the web site for what is available. I brought my kids to several of them, squirrels, doves, rabbit, quails, turkey, and we went back every year so much we enjoyed it. They have deer too. You will learn the basics and a lot of other things. NOW it is probably the right time to apply for what they have organized for the fall.
You must log in or register to reply here.

In search for a hunting club/hunting property

In search of a hunting club/hunting property