It's Great To Be Back Home

ClassicBlue said:
this thing is half the size of the piece of cheese.
Click to expand...

Maybe the "cheese" is just extra large? LOL, who am I kidding?

palmettomoon said:
Any of it now gives me wicked heart burn.
Click to expand...

Wish that was all it did to me. Then there was the Varsity in Athens. 35 minutes and hope traffic ain’t bad going home. Lol. But loved some Varsity. It just didn’t love me back.

I shouldn't...but I do...busy work days followed by the wife and I running two boys in different directions for after school stuff multiple times a week usually ends in some fast food runs here and there when we are spent from a crazy day.

That's why i raise angus . always fresh and it came from my pasture !
K

In the 1950's burgers and hotdogs from Yellow Jacket, or just up the street at the Varsity, were always really good. In the mid 1960's McDonalds hamburgers were pretty good and Krystals were great (at 7 cents each). The Whopper was so big that most people asked them to cut it into two pieces, something they gladly did.

Years passed. In Japan in the early 1990's we would make road trips, about 30 miles round trip, to the McDonalds and get Big Macs and quarter pounders for everyone on shift. The Japanese though nothing of an order for 40 or 50 of each and 100 orders of fries. The burgers were actually pretty good. Burger King got the on base franchise. The services was good of else the Base Commander got on their case. The food wasn't great but it was passable and the only thing going unless you wanted a burger from the BX.

Now days I can't eat Whooper or Big Mac. My diet from those 2 places is sausage biscuits and tater tots from BK or Sausage, Egg and Cheese mac muffin from McDonalds. They are both pretty good. Krystals burgers taste like nothing (crunchy air?) but their chili is pretty good.

Let's not get started on Taco Bell or Del Taco, neither one of them can ever get an order right and the food is very much like seasoned cardboard.
K

lbzbeast said:
That's why i raise angus . always fresh and it came from my pasture !
Click to expand...

My freezer isn't very big but are you selling steaks and ground chuck? Can't afford half a cow or even 1/4 but might be up for some good deals

McDs was good when they had foil ashtrays on the tables.
However, I bet that thing would be pretty good after 2-3 days with no food....maybe 4

My last Mickey d's was the one by the Bass Pro in Macon. That was before they opened all the restaurants around that area.
It had probably been 2 decades since my last visit but I was really hungry and there was nowhere else to eat.
I got 2 cheeseburgers and a fry and I was cramping before I even made it home...never again. I'd rather starve.

and the horse you rode in on

hard to find a good burger anywhere.
You must log in or register to reply here. 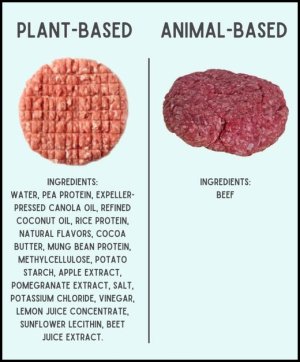 To All of You Vegan: I will stick with my animal-based beef for my burger!!!
2 3